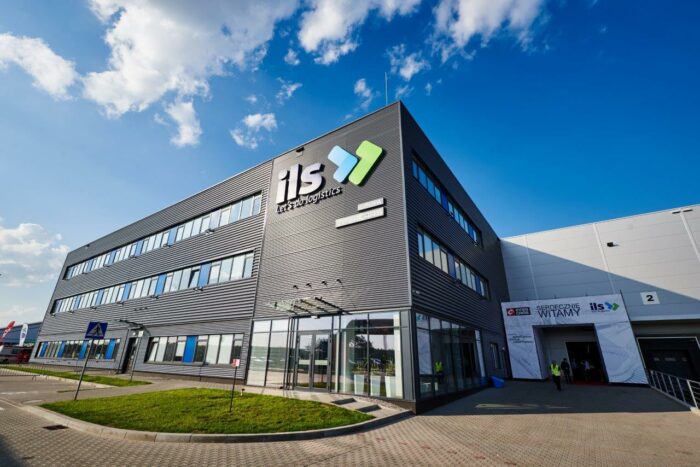 2.5 thousand people took part in the ceremonial opening of the ILS European Logistics and Development Centre. The guests had a chance to see with their own eyes the premises of the investment with total area of 15 ha, 40 thousand m2 of total storage space and 11 km long conveyor system. Everyone was much impressed by the centre. as it is really modern and with striking size. The warehouse is one of its kind in the whole Europe in the automotive industry.

The whole area of the ILS European Logistics and Development Centre is 15 ha. Offering as many as 40 thousand square meter of storage space in 3 warehouses. The area of the main, built from the scratch hall, is 30k m2 and inside it contains 14k m2 of 4-storey rack system. Two smaller halls, 5k m2 each, are adapted buildings, which were already built there when the investment land was bought.

The main hall contains a conveyor system with total length of 11 km. Modern technologies are used in ILS premises, in the form of a purpose designed sorting system for goods. The sorter system is composed of stock replenishment station and returns service station, conveyors, cross belt sorter for goods, sorting them for customers and shipping sorter (shoe sorter, dividing parcels to different delivery directions).

Cross-belt sorter is a sorter with cross belt construction. The goods are placed on wide belts, which move in a loop. In a proper place, the belt directs the goods on it to the left or right, to a proper destination. Removing the goods to a selected chute is realized by turning the belt mechanically. The risk of collection errors is minimized practically to zero – the cross-belt sorter gives 99.9% certainty of correct item sorting. Within one hour it is able to sort up to 30k pieces of goods. At one time the commodity can be sorted even for 720 customers.

Whilst the shoe-sorter provides top efficiency and sorting precision for many types of commodities (in case of ILS these shall only be parcels and shipping totes). It is a horizontal, highly efficient sorting system, which conveyor is made of pressed aluminium profiles. The construction of the conveyor is closed so no goods can fall or be stuck. Sliding elements of the sorter move gently along the profiles, changing the direction of goods which are moved towards the slide to the point of collection. The number of used slide elements depends on the length of sorted goods. The system makes it possible to sort to one or both sides of the conveyor. Within one hour time the sorter is able to process up to 2.5 thousand parcels and divide them into 50 different destinations (e.g. for 50 different branch routes).

Using the sorters, will be able to sort even up to 500 thousand items and release 60 thousand parcel in 24 hours’ time.

– The logistics centre is our future. Why have we constructed it? One might say that for ourselves, to reduce costs, optimize our work. This, of course, is true, but also our customers will gain from it, as it will surely influence the service quality. Inter Cars has always tried to be the leader, setting new trends and standards in the industry. The warehouse in Zakroczym is the only warehouse of this kind in the industry in Europe. All the machines– the sorter – streamline the sorting process and reduce the number of errors. Huge amount of work of developers supported this process, our people, who designed how it is all supposed to work – said Maciej Oleksowicz, President of the Management Board of Inter Cars. – The centre provides services for several countries in Europe. Currently it is our biggest warehouse, with the biggest number of products, but besides it we also have several regional warehouses in Poland. I have to say that again we are looking into the future. We are already thinking where to build another such centre, just bigger and better – he said.

2.5 thousand customers took part in the ceremonial opening of the ILS European Logistics and Development Centre.

– I have not imagined such an area and so advanced technology. I have never been to such big logistics complexes, delivering parts to us. I was the most impressed by the whole network of technologically advanced devices, which are responsible for sorting spare parts and directing them to shipping area – in such a way, that they are sent to the right customer – said Tomasz Skorupski, owner of Automax garage.

– It was really nice to see the central warehouse, to learn how it all works. I suppose that in the future we will have greater possibilities and understanding of what the logistics provides us. All this, because we can see how the process looks like from the very beginning – said Filip Szelenbaum from Wiking Serwis company.

The aim of the Inter Cars investment was to improve customer care. The chances and advantages resulting from operations of such a modern warehouse are also noticed by the customers of the Company.

– The new logistics centre is overwhelming. Looking at such a huge area, the legs yield because of the impression. Entering here for the first time, one needs a guide. Modern technologies, conveyors, electronics – this will surely improve the operations of the warehouse. I hope that thanks to such an area, new brands and new parts will be available in even greater number. I also believe that this investment will help in daily work of me as a standard garage – said Krzysztof Śmigiera, owner of Moto Usługi garage.

– I like the new ILS centre very much. It represents the professionalism of Inter Cars I think that it will also influence the trust of customers to us, repair garages. Here they can see the top level of modern solutions, and later on they look at us in the same way, assuming that the standard is the same also in our garages – noticed Dominika Bajron, representing the Auto Service Tadeusz Bajron company.

After a short official part, the guests were invited to the main part of „Feast without Limits”, led by Krzysztof Tyniec. The Zbigniew Górny Orchestra, accompanied by such artists as Rudi Schubert, Elżbieta Zającówna, Władysław Grzywna, VOX Group or Kwartet Rampa, took the visitors for a journey through the world of European and American hits. The star of the evening was Małgorzata Ostrowska. There was community singing and dancing.

And as during a real feast, the tables yielding beneath the weight of all the food and drink, traditional Polish dishes and also the most modern ones.

Watch a film , showing how the ILS European Logistics and Development Centre was built.

This website uses cookies to improve your experience while you navigate through the website. Out of these, the cookies that are categorized as necessary are stored on your browser as they are essential for the working of basic functionalities of the website. We also use third-party cookies that help us analyze and understand how you use this website. These cookies will be stored in your browser only with your consent. You also have the option to opt-out of these cookies. But opting out of some of these cookies may affect your browsing experience.
SAVE & ACCEPT